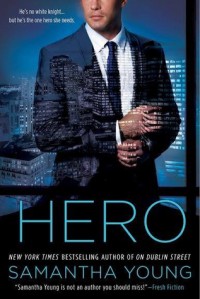 This book has solidly put Samantha Young on my list of authors who can be counted onto tell interesting, well-written, love stories. Even though the billionaire-ingenue trope as been done TO DEATH in the aftermath of 50 Shades of Grey, it's still one that I love. I'm a total sucker and I just keep picking 'em up. 9 times out of 10 I get so annoyed with the stories that I want to throw my kindle across the room by the end of it. I've become more and more picky about the quality of the characters, the writing, and the overall believability of the story, especially in the billionaire romance genre. Young doesn't disappoint. She delivers a solid story here with two very interesting, readable characters.

But, I'm pleased to report that this is a GOOD one.

Alexa is a very strong woman, independent but with some baggage. Our resident billionaire is of course, handsome and awe-inspiring, but he is also kind of a jerk. But a jerk that you can believe. A lot of times with these kinds of alphas the authors just go waaaaay too far with the jerk-face maneuvers and I can never get behind the hero afterwards, especially since it is hardly believable that someone who is just a completely selfish a-hole would make a remarkable 360 over a woman, who most of the time is nothing remarkable. In Hero however, I think beside Lexie is so much her own woman and the conflict centers around more than just Caine being an ass to her because he's generally an ass, it works. I liked that the whole book didn't center on the conflict of Caine disliking Lexie solely because her father had done some horrible things to Caine's mother. He was able to see that she was her own person by about the middle of the book and the conflict moved it Caine having to confront his own fear of commitment demons, but again those demons were believable. I also really enjoyed the neighbor, Effie, who played the role of token advise giver to both Lexie and Caine. I usually hate secondary characters, but she was quality without the cheesiness that usually accompanies the side-romance characters.

I read Young's On Dublin Street and liked it, but didn't love it. She's shown a lot of growth as an author with this one and I'll be on the look out for her new books and probably read her back catalogue.
Tweet